The (Once) Beautiful Game

By TheTruthShallSetYouFree on June 9, 2014 | 5 Comments 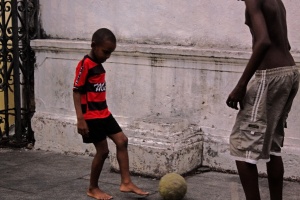 Hi, my name is Sydney and I’m addicted to soccer. I got addicted at 8 years old. I remember the day like it was yesterday because that was the first day I got asked what my most favourite soccer club was and I responded with the peace sign and said without a doubt in my heart : “Kaizer Chiefs”. Before this particular day, I always just giggled and ran off without saying anything, but on this day, I had listened to my first full game on a “wireless”, aka the “fm” but generally known as a radio. Kaizer Chiefs had beaten the other local giants Orlando Pirates FC 3 – 1 in a Mainstay Cup Final. And that’s it, I was hooked.

Before that day I had only played soccer with other kids with a ball made out of discarded plastic bags. It took a bit of skill to get the ball together, the trick was ensuring you had enough of these plastic bags to give your ball a bouncy feel.  You also had to weave the plastics such that if the outside layer came off during the game, there were enough inner bags to keep the game going.

I don’t remember when I started playing, but I must have been six or seven years old. This was nothing special, any boy who could walk played soccer in my village. You didn’t have to be good at all. No, if you could walk you played. The older boys always assigned you where to play based on your skill level. The year I got hooked to listening to professional soccer games on the “wireless” was the year I discovered I had a gift for keeping goals. In those days, school holidays were basically just soccer playing days.

We played soccer every chance we got, interrupted only by errands adults seemed to want to send you on right in the middle of that exciting game. We only did other stuff if we couldn’t play soccer.

Then something magical happened one year. Over the school holidays my parents bought me a plastic soccer ball. It was white with black hexagonal shapes on it. I cannot forget that “new plastic” smell that came with it. I could not wait to get back to the village to become the centre of football decision-making. Look, everybody played but not everybody made the decisions. To make the decisions you had to be one of the older boys or alternatively, own the ball. Overnight, I became a decision-maker. If we had more players than we needed, I never had to wait on the side-lines. I was the ball owner. If we needed to put a few cents together to play the other team for money, I didn’t have to pop out a cent, I was a football owner. For obvious reasons the game could not start without me. And as unpalatable as this might sound, I could literally end a game. That was power I tell you.

But all good things come to an end, my black-and-white plastic soccer ball lasted a full six months before one of those abundant thorn trees decided to play catch with the ball but never returned it. It was a little miracle that mine had lasted as long as it had. I remember kids whose decision-making time was a mere three hours. For some it was days. And the thorns got it. And when it happened a lot of finger-pointing and tears followed. The poor decision-maker would be left clutching his now-deflated plastic ball and tearfully threatening the last person to kick the ball that his older brother/cousin/uncle would “deflate” him too.

My ball was actually jinxed by an older cousin. I had had that ball for so long that in my own childish mind I actually believed it would last forever. We had a game against another village that day. And as usual I was keeping goal. We must have been winning the game because I had plenty of time to chit-chat with people, including my cousin who said “Are you aware that you’ve had that ball for six months? Something will happen to it soon”. A few moments later the ball was on top of a rather large thorn tree. Had it not been my cousin who jinxed it things would have been pretty ugly for them that day, they would have had to deal with a lot of accusations and tears from me.

When I “graduated” to listening to games on the “fm” I got immersed into another world. That meant that every Saturday and Sunday between 15H00 and 18H00 I made my way across the rather lushly-vegetated fields to the homestead that we listened to the radio from. It was not every family that took their wireless outside for everybody to listen. Some families saved their battery for the evening “story” and the news.
But we had relatives who were soccer addicts and didn’t mind adding newer addicts to their group. From that day, the day of the Mainstay cup final, I learned to exercise my imagination.

Radio commentary was a skill that required the listener to have an active imagination. You had to “see” the players in your mind’s eye. Imagine their shapes and their heights and their walk and their mannerisms such that the day you saw them on TV, you could almost swear you knew them. Here was the most beautiful thing: back in those days I never questioned why an Afrikaner man, Jimmy Joubert, was my most favourite defender, or why an Englishman, Peter Balac, chose to play for my most favourite team, Kaizer Chiefs, when he could just so easily have chosen to turn his back on the beautiful game because of the politics of the day. When I was between the poles, keeping goal, I was Peter Balac. I never read Cinderella or Pinnochio as a young boy, I never had the privilege of imagining fairy tale characters or learn about Robin Hood. I learned to use my imagination visualizing the soccer skills of my heroes from listening to the wireless.

I began to live for Saturday and Sunday afternoons. However “painful” the intervening days were, Sunday afternoon was coming where the wireless could transport me from our tiny village to Ellis Park stadium 500kms away, for a full 90-minutes of using mental pictures to escape our little world. And when we returned to the soccer field on Monday following our professional clubs’ triumph, we would use our little imaginations to put ourselves in the shoes of our heroes. And the world was a better place, because of the beautiful game.

So my addiction is incurable. When my significant other complains that she sometimes feels like a “second wife” when soccer is on television and I don’t respond it’s not because I don’t agree. Soccer and I have come a long way. I have expended a lot of energy trying to find a way to explain my connection to soccer, it’s inexplicable. It’s not even a connection. It’s part of me. I cannot explain how when I felt like I don’t “belong” anywhere the only place that I felt at home was on a soccer field.

I find it impossible to explain that Cristiano Ronaldo, Lionel Messi and Andreas Iniesta are cut from the same cloth that I too had the privilege of hanging onto, a pure undiluted love for the game. Playing it from the heart. The magic of Maradona in ’86 only served to cement my love for the game. Roger Milla of Cameroon in Italia ’90, Bebeto of Brazil in USA ’94(the heartbreak of Roberto Baggio of Italy missing a penalty in the final), Ronaldo, Ronaldinho, Zidane, the list is endless. All of these I watched on television, but a part of me thinks a “wireless fm” would have done just fine if they had found me in that little village back then.

As I selfishly wish for the poor folks of Brazil to “respect my other religion” and shelve their demands for a better life, my heart yearns for the days when the beautiful game was not as affected by greed as it is now.

When FIFA decided to bring the World Cup to my country in 2010, I understood fully that the money men would milk us dry, but my addiction, my love for the beautiful game allowed me to turn a blind eye to that. It allowed me to go and watch a Brazil led by Dunga demolish Chile 3-0 at Ellis Park. I too sang along with the Brazillian supporters, “Ade Chile”. That night had the same magical feeling that I got each time I celebrated a goal listening to a game on the wireless, a feeling that wants you to scream, “did you see that?” even though the game is relayed to you through the radio. It’s pure magic.

When a football federation takes over a country for a whole month just to make as much money as they can from the beautiful game, I feel guilty that yet again, the magic on the field of play will make me forget my problems and the problems of Brazil’s poor people. Karl Marx got it wrong when he said “Religion is the opium the masses”, football is. Ask me, I’m an addict.

Because there's no black future without no black vision

Can Anybody Hear Me?

where would-be writer works with words

Sweden and the Middle East Views

Articles, updates & views - from another angle than in your mainstream Western media

A comprehensive resource on TB Joshua and SCOAN

About my journey to becoming, hopefully, bikini skinny.

Striving to be better one post at a time.

Global issues, travel, photography & fashion. Drifting across the globe; the world is my oyster, my oyster through a lens.

Your Daily Cup of T.

From a Different Angle

A collection of short stories , photographs and, of course a few opinionated articles.

Telling America's Story for Over 20 Years

The World I Want

Making Every Day A Masterpiece

A fight with my Life

An Informed View of South Africa, Africa and the World

My Life Advice: Always remember.. What Would Katelyn Think? WWKT