THE TRUTH SHALL SET YOU FREE

There are issues that I’ve avoided commenting on in my blog. The reason is mainly that they have not been resolved legally or because I deem them too sensitive for me to look at objectively. Today’s blog addresses  one such issue.

On Valentine’s Day this year we woke up to the surreal(or unbelievable?) news that a top South African athlete had shot dead his girlfriend in a case of mistaken identity, thinking she was a burglar. It didn’t take long before we found out that the athlete concerned was the era-defining Paralympic and Olympic athlete, Oscar Pistorius. I was gobsmacked. No, not Oscar, he’s the brightest track star to have come out of our country in years.

His role in changing the face of athletics will be better appreciated in years to come when more disabled athletes take part in the regular Olympics competing against able-bodied athletes. The one person…

By TheTruthShallSetYouFree on October 4, 2014 | 10 Comments

At the beginning of 1995 I decided to get my right ear pierced. I got the piercing and chose a gold plated stud to bling my ear away. I cut my hair short and did an s-curl. It didn’t matter that the hair transformation came at a very painful cost to my scalp.

I had never applied strong hair straighteners to my head till then. The salon lady, in some dingy 7th floor flat in Central Johannesburg gave me a look of disdain when I complained about the burning pain that the s-curl lotion inflicted on my scalp, a look that said, “so you expected this to come painlessly?”. For the first time I understood where the phrase “Bontle ba berekelwa” came from. Loosely translated it means “looking good comes at a cost”. I was happy with the final look though. The gold stud and the s-curl gave me that little extra confidence boost that was necessary to carry favour where it mattered, with the ladies. Remember, no one holds a patent on vanity.

Imagine my shock three months down the line when I discovered that a stud in the right ear was an ‘underground’ signal in the gay community that said “I’m available”. I immediately cast my mind back to the few situations where I may have received unsolicited attention from fellow males. There was one unforgettable instance two weeks prior to my discovery at a nightclub in Yeoville. I had received the most beautiful smile from a gentleman as we passed each other in the passageway to the restrooms. My s-curl and stud were definitely working, only my intended targets if you will, were those of the opposite sex. I realised the stud had me assume an identity that I was personally not aware of. A mistaken identity if you will.

No, I didn’t stop wearing my stud on discovering that I might be sending mixed signals out there. It had taken an enormous amount of courage for me to overcome my shyness to get the damn stud, let alone the risk of being disowned(boys just didn’t do ear jewelry in my dad’s house). If it worked both ways, tough, I couldn’t help it. Unfortunately I got a nasty infection on my right earlobe, and had to go pierce the obviously homophobic left one as I left the right earlobe to heal.

Looking back, I just realized that for the period that I had the stud on the right ear I had led certain people to believe I was someone I wasn’t. There is nothing wrong with what my mistaken identity was taken to be, but I find it fascinating that human beings feel the need to put labels on everything so that their world can make sense to them. Sadly those labels don’t come light, they are loaded labels. Take for instance, this incident that on the face of it seems innocuous, but under different circumstances could mean life or death.

When the first wave of West African immigrants hit the streets of Johannesburg I nearly got arrested for being in the country illegally. One Sunday afternoon I was walking in Joubert Park minding my own business when two undercover cops appeared on either side of me. In the most conversational tone one of them asked to see my ID. I thought this was some kind of a joke, the need to carry Identity Documents on your person at all times had been abolished a few years before. This was a free South Africa, or so I thought. What they didn’t count on was that this ‘illegal’ immigrant could converse in near-perfect Zulu and Tswana, which they were using alternatively, obviously trying to use the languages to establish my claims to being South African.

This illegal immigrant was also cheeky, he was soon talking about his ‘human rights’ and they quickly parted ways with me. That’s when a certain person whom I assumed to be local came up to me and indicated that wearing a national soccer Tshirt in town was one of the ways immigrants used to blend in with the local population. It didn’t help that I’m quite tall and my skin colour not too fair. Add a soccer Tshirt and I was a Ghanain or Nigerian.

This is a mistaken identity I was not about to shake off. As the years went on I have grown to accept that in our country that is so conscious of physical differences, chances of me being identified as “the other” will always be there. The mistaken identity can be an innocuous little mistake. Like the other day at the Carwash.

This lady assisting customers approached me whilst conversing with one of her colleagues in a local language. She immediately switched to English the minute I rolled down my window, a sure sign that I had been identified as “the other”. When I responded in one of the local languages the shock on her face was priceless. She even called a colleague to help her witness this amazing freak of nature, a “foreigner” who spoke the local languages perfectly. The only thing is I didn’t giggle along with her to start with, and nine out of ten times people apologize for the mistake, which tells me their label was negatively loaded. I’m no meanie so I normally ease the tension by letting them know they are not alone in giving me their assumed foreign identity.

But when the ‘Xenophobia’ violence of 2008 broke out, a case of mistaken identity could have meant injury or worse, death, as was the case for 62 other people.

People are so fixated on boxing things that if they cannot get a handle on who you are, they will invent a box to fit you into. Having been a shy and very self-conscious young person, I know what it feels like to want to fit into that box created for you by people who want their own little worlds to make sense by boxing you.

In this social media age one would have thought one’s identity mattered less, as long as they are “like-minded”. But all too often, one gets those comments that make you realize that people’s urge to fit others into their own little boxes remains strong. The danger here is people’s online identities have been shown to be elastic. Online, a person will interact differently with different sets of people.

I have taken a conscious decision to not ‘censor’ my online identity as I did my personal one to fit into boxes people created for me. I mean if one cannot be oneself online and in real life when can I truly be myself in interactions with people?

I will comment on and agree with an atheist’s post as much as I will “Amen” and “Hallelujah” a post by a fellow Christian. The only requirement is that they both make sense to me. “Boys will be boys” when I’m interacting with fellow men on that sexy actress from Isibaya and I will defend women’s rights to dignity because the two do not have to be mutually exclusive, at least till I’m convinced otherwise.

I refuse to censor my thoughts simply because of what my Christian friends would say about my support for gay rights. Rather have them say whatever they want to say than go against my personal principles that tell me that one’s sexual orientation has jack to do with me. As Oprah would say, “you cannot tell adults what to do in the bedroom”. I would hate to be told what to do there too.

To adapt your identity to fit what others want you to be is to exclude a great number of phenomenal people from your life. If you are anti-Islam you have excluded several billion people from having meaningful interactions with you. To stick to interacting with one group of people is to reduce your view of the world to be very narrow indeed. And chances of becoming a hypocrite, a bigot or whatever “-ist” increase exponentially. 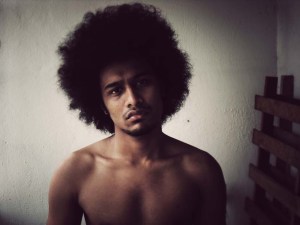 Who Am I? (Picture used courtesy of Creative Commons, uploaded by moRkiro)

So when I grew my beard and the group of East African immigrants mistook me for one of their own and greeted me in Amari, I felt just as proud as I did when that gentleman at the club smiled at me in the sweetest way, thinking I was gay. The way I see it, a mistaken identity that doesn’t put you in a small little box is fine, because it has never stopped me from being who I am.

Because there's no black future without no black vision

Can Anybody Hear Me?

where would-be writer works with words

Sweden and the Middle East Views

Articles, updates & views - from another angle than in your mainstream Western media

A comprehensive resource on TB Joshua and SCOAN

About my journey to becoming, hopefully, bikini skinny.

Striving to be better one post at a time.

Global issues, travel, photography & fashion. Drifting across the globe; the world is my oyster, my oyster through a lens.

Your Daily Cup of T.

From a Different Angle

A collection of short stories , photographs and, of course a few opinionated articles.

Telling America's Story for Over 20 Years

The World I Want

Making Every Day A Masterpiece

A fight with my Life

An Informed View of South Africa, Africa and the World

My blog does not have a direction.